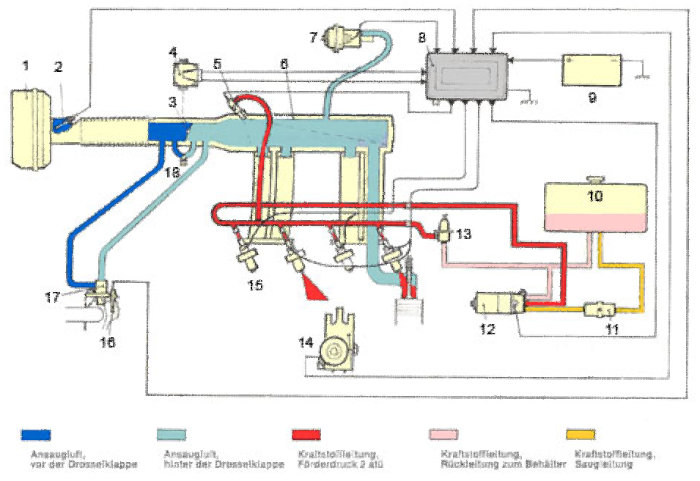 Fuel is drawn by the electric fuel pump from the tank via and through the filter. From here it passes into the fuel pressure line.

The duration of injection (fuel quantity) is governed basically by two factors: by the engine speed and the load condition of the engine.
The engine speed is relayed to the control unit by the distributor contacts I and II. The load condition is determined by measuring the absolute pressure in the inlet manifold. This pressure is converted to an electrical impulse and relayed to the control unit by the pressure sensor, which is connected to the common inlet duct by a hose.
The control unit processes this information and gives a signal for the injectors to be open for a longer or shorter period of time.
The control unit thus allows a varying amount of fuel to be passed through the electrically operated injectors depending on the engine load and speed. This is how the "basic quantity" of fuel is governed. In addition to the "basic quantity" of fuel, an accurately metered amount of fuel is injected when starling at low ambient temperatures, when warming up, during acceleration and at full load. The cold start valve injects fuel into the common inlet duct for as long as the starter is operated.
During warming-up the control unit receives information from the temperature sensor in the cooling water circuit and in consequence permits the injectors to remain open for a little longer time. But, if the
engine is to operate properly with the increased flow of fuel, more air is required. This is obtained through the auxiliary air regulator which gradually closes as the engine temperature rises.
The electronic control unit receives impulses for additional fuel during acceleration from the throttle valve switch. When the accelerator pedal is depressed, impulses are released from the throttle switch to the control unit which gives orders to the injectors to inject a number of times between the ordinary injections. If the accelerator pedal is depressed quickly, the duration of injection will also be longer than the ordinary injection time.
The throttle valve switch has also another function. When the accelerator pedal is eased up and the engine brakes, a contact in the throttle valve switch is actuated and emits an impulse to the control unit which closes off the fuel injections. If the speed drops fo approx. 1000 r.p.m., the fuel supply is switched on again so that a smooth changeover to idling operation is guaranteed. The throttle valve switches off the fuel supply when the speed is over 1700 r.p.m.