Bill Webb wrote and published in 1988 the book "Swedish Iron aka VOLVO 1800", which serves not only as a production history of the VOLVO 1800, but covers detailed restoration techniques and specifications. 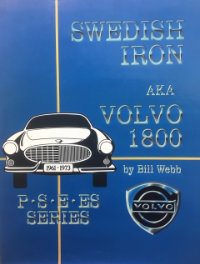 The specifications center around that of the VOLVO 1800 series, however the procedures and descriptions of various step-by-step restoration techniques can be used as a general guide for the repair and maintenance of many other cars of similar construction.

Bill Webb is a true sports car enthusiast having owned over 45 cars since the late fifties. He drove almost every model of VOLVO produced, starting with the purchase of a 444 sedan in 1958. He owned seven VOLVO 1800s. Also he has had a particular addiction to European sports cars of the 60's, many of which he has restored and shown at national levels.

Bill Webb has encountered many of the same problems and implemented the same repair methods over the years. During this time the following cars were purchased and restored with many reaching national status in show car competition: